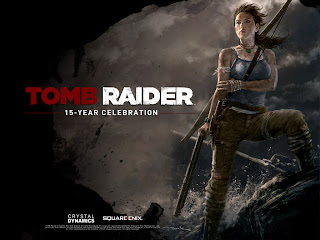 I'm honored to have been asked to participate in the 15-year celebration of Tomb Raider.  As some of you may know the Tomb Raider franchise has special significance for me.  Way back in 1999, I was asked to be the penciler on the new Top Cow Productions comic book series Tomb Raider.  It was a no-brainer because of the success of the video game franchise and Lara Croft was a pop culture icon already at that point.  So a comic book series based on her made perfect sense.  I drew that comic book for over 2 years from issues 1-20.  It was one of the most amazing times in my career.  I was able to travel throughout the United States and the countries of Europe to attend conventions, participate in signings at various comic book stores, and live the adventurous life that a comic book artist gets to live.  => It was amazing.
It was great to illustrate Lara after so many years albeit in a bit of a different way than I used to (digital paint vs. pencil and paper).  She's based on the upcoming 2012 video game from Crystal Dynamics so she's a bit different than the Tomb Raider of past.  This new game is a sort of reboot or retelling of the character.  So she's not uber confident just yet.  I wanted to show that in the piece.  She's has confidence deep within but it's still just brewing right beneath the surface.
Crystal Dynamics is showcasing illustrations by 8 artists throughout the month of October to celebrate the 15th anniversary.  I'm honored to launch their online exhibition.  Please check it out (and throughout the month) at:
http://hiptic.com/tombraider15#/ 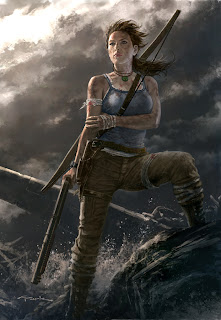 Awesome, I think i found the great inspiration. And nice to see your post again as your previous post was at July 7, 2010

Andy's Lara is my Lara, moreso than even the videogames :3 So happy to see him in Tomb Raider again, and can't wait for the new game!

this is like the Best project ever :D
i wish someday i could draw stuff like you , andy park :|

This illustration is stunning. As soon as I saw it, had to use it as my new desktop wallpaper, and I presume it will stay there for a long while.

YAY!!! Now we are talking!! Happy that you took time and challenge to do this. Old-school in a make-over XD

Gotta love my Lara, if you combine it with the art you did on Gow, you have an awesome match.

Can't stop looking at it O.O

wow, You inspried me to become an artist when I first read TR, so thank you. Can't express how happy I am too see you illustrate Lara again. Stunning.

She looks like Scarlett Johansson and... wow, this is so good.

I have been a fan ever since I can remember both you Andy and Lara. This is amazing Andy...just too amazing!

wow, really nice piece. Feel like it really captures the tone of what their trying to do with the character

Thanks for sharing this game.I have played this game many times. Girls Games Online. This is my one one of the most favorite games.

Andy, your take on Lara got me into comics in and drawing in the first place. Thanks for giving us all such a wonderful gift. I'd always hoped youd be a part of Lara's life again in some form.

I do not know that the best woman or a Lara))

Very pretty :o
Do you work on God Of War Ascension ??
Come look my blog (not so good painter but you can see it ;) )

I really liked this part of the article, with a nice and interesting topics have helped a lot of people who do not challenge things people should know.. You need more publicize this so many people who know about it are rare for people to know this... Success for you.....!!!

I really liked this part of the article, with a nice and interesting topics have helped a lot of people who do not challenge things people should know... you need more publicize this so many people who know about it are rare for people to know this... Success for you.....!!!

Thanks for your very useful Information. I will bookmark for next reference. I really liked this part of the article.
I wait for the next post :)

Thank you for giving posts and articles were very amazing. I really liked as a part of the article. With a nice and interesting topics. Has helped a lot of people who do not challenge things people should know. You need more publicize this because many people. Who know about it very few people know this. Success for you....!!!

Thanks For Sharing the wonderful information...........

Thanks for Sharing That... Sucses for You

I agree with you.This post is truly inspiring.
I like your post and everything you share with us is current and very informative,
I want to bookmark the page so I can return here from you that you have done a fantastic job


Fantasy Cricket App is a gaming app, where you can make virtual team using your cricket skills and knowledge. Using this team, you can play different contests and win exciting prizes.new fantasy app


The post is quite informative as I could derive a lot on the topic by reading through it. At MyAssignmentHelpNow, We Offer Pocket-Friendly assignment writing services. Students trust our assignment help in Australia. To get genuineassignments within deadlines, Hire Us Today! assignment help online

A debt of gratitude is in order for sharing this game. I have played this game commonly. Boys Games Online This is my one quite possibly the most loved game.

Your article was very impressive to me. It was unexpected information,but after reading it like this 온카지노, I found it very interesting.